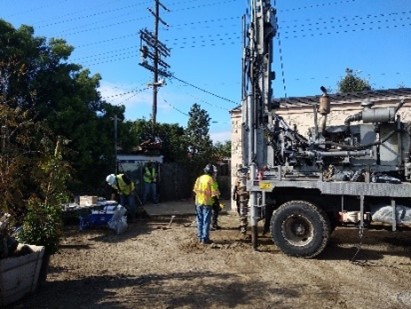 GAI performed comprehensive geotechnical and geohazard investigation services, including field exploratory program, laboratory testing, office engineering, and preparation of final reports, including the study methodology, field logs, laboratory analyses, and our recommendations for the design and construction of the proposed developments from a geotechnical standpoint. In addition, we worked closely with the design team (Stantec) and the design-build contractor (Kiewit), providing geotechnical data and recommendations throughout each stage of this complex design-build project. GAI is currently providing geotechnical support services for the project’s construction phase, which started in late 2019 and is estimated to be completed in 2022. 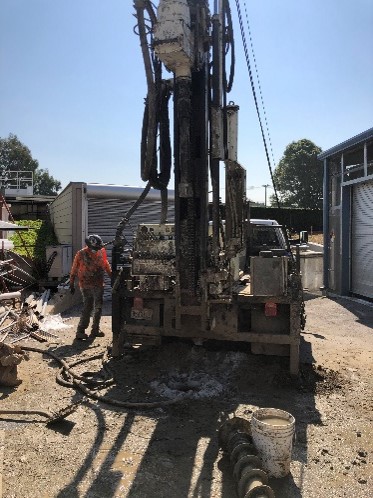 The project involved water treatment plant upgrades at Arcadia Water Treatment Plant, located in the City of Santa Monica. The modifications and upgrades included an extension to the existing RO Building, a new chemical storage area on the east side of the facility, a Booster Pump Station, a UV/GAC/AOP treatment area covered by a canopy structure; and concrete pavement. The new facilities were constructed on slab-on-grade and/or mat-type foundations, and a ten-foot-deep sump was also constructed.

GAI, as a sub-consultant to Brown and Caldwell, provided a geotechnical engineering investigation for the design and construction of the project, which included performing site reconnaissance, performing an exploratory field boring program, collecting bulk and relatively undisturbed samples at regular intervals of depth and changes in the subsurface materials; conducting laboratory tests on selected samples; and preparing a final geotechnical report. GAI is currently acting as the geotechnical engineer of the record (GEOR) for the construction phase of the project. 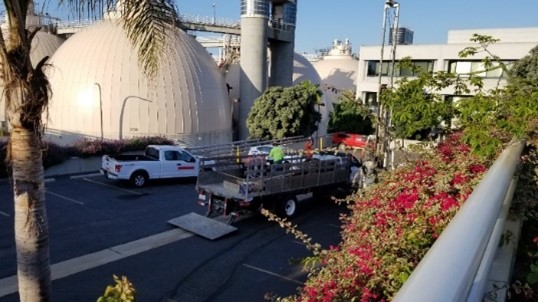 HWRP is located within the City of Playa Del Rey, California, and is the largest facility of its kind in California. The Plant included several below-grade and partially below-grade liquid retaining structures, pump stations, and a below-grade pipeline system. In addition, the proposed developments consisted of the design and construction of an Advanced Water Purification Facility (AWPF) at the subject site, including:

GAI conducted a comprehensive geotechnical investigation and geohazard evaluation for the project, which included conducting more than 15 deep borings, performing laboratory tests, engineering analyses, evaluating the stability of the adjacent hillside slope (100 ft. in height), and preparing a final report for the project design team which included recommendations for the design and construction of the treatment facilities. The project involved a tight schedule and GAI was able to comply with the design team (Brown and Coldwell) and the design-build contractor (Walsh) timeframes successfully. 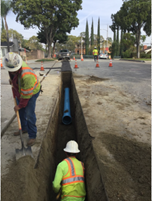 The project included the design and construction of the Quadrant III Water Main Replacement comprising 13 segments. The project required the replacement of the 8-inch diameter Class 200 PVC piping, located approximately 4 to 5 feet below the ground surface. The length of all the piping segments used for this project roughly totaled a length of 7,500 feet.

GAI provided geotechnical investigation services. Our engineering team performed a preliminary study on the designated streets. The scope of services included: a total of 14 borings were conducted, based on the length of the waterline of the project as well as the type and the number of lanes for each street being worked on; site reconnaissance, evaluation of the general site conditions, and marking the proposed boring locations for the purpose of underground utility clearance; conducted fourteen 20-foot deep exploratory borings at the proposed locations within the project length using a truck-mounted hollow stem drilling rig, and sampling at 5 feet intervals, for the substrata profile determination; performed laboratory tests on selected soil samples obtained from the exploratory borings; reviewed the field data and the laboratory test results, performed engineering analyses, and prepared the final geotechnical evaluation report for the site, which included the findings and recommendations for the design and construction of the proposed development.

The project included an extension of a proposed recycled water pipeline in six different streets within the City of South Gate. The total length of the project was approximately 22,500 feet, about 4.3 miles. The client for this project was CBMWD, and SA Associates, the prime consultant, retained GAI’s services. GAI performed a comprehensive geotechnical engineering study to extend the proposed pipeline. Our scope included performing soil investigation to determine soil suitability for construction and trench safety, determining substrata profile within the length of the project, and providing design parameters including soil pressure for shoring design. GAI conducted a total of 21 borings by utilizing a hollow-stem truck-mounted drilling rig, and the borings were advanced to a minimum of 15 feet below the grade or 5 feet below the pipe invert. The streets where borings were conducted included numerous underground utilities and high-pressure lines, which required careful supervision of drilling operations. Soils samples were tested for characteristics and strength determination. After analyzing the laboratory results, GAI prepared a final report that included our recommendations for designing and constructing the proposed recycled water line from a geotechnical engineering standpoint.

The purpose of the project was to monitor the displacement of the deep tunnel shafts’ walls and the settlement of the underground tunnel due to the construction of a new sewer line. GAI provided geotechnical instrumentation and monitoring services for this project. We installed four inclinometers, each between 25 to 40 feet deep, and six vertical/deep extensometers of about 70 feet deep to monitor the movement and settlement during the construction. Daily reports of instrumentation readings were prepared and provided to the project team. 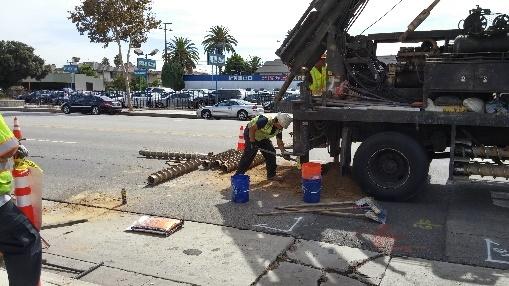 The proposed development at the site included replacement of the existing sanitary sewer line with a larger diameter vitrified clay pipe (VCP). The existing pipe diameter ranged approximately from 10 inches to 18 inches from Garfield Avenue to 8th Street while the proposed replacement VCP ranged approximately from 15 inches to 24 inches. The existing and future VCP lines were located at the depths ranging from 13 to 19 feet below the ground surface (bgs) along the segment of the project and included periodic manholes that extended up to ground surface.

GAI’s scope of work comprised of conducting field exploratory borings, performing laboratory tests on collected samples, and preparing a final geotechnical report with our recommendation on the deep trench excavations and utilizing shoring. 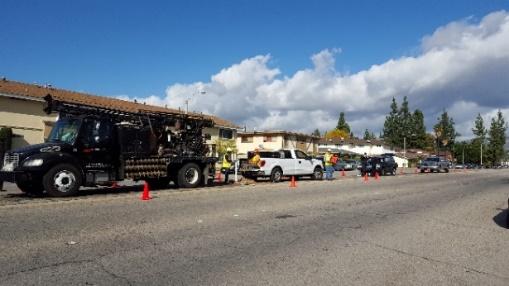 The City intended to design and construct an on-site storm-water disposal system. The system would collect and infiltrate Garey Avenue runoff into the ground. GAI scope of work included conducting several exploratory borings at the designated locations, conducting SPT and sampling at 3 feet intervals for the substrata profile determination, collecting disturbed/bulk samples of the encountered subsurface material, conducting three percolation tests at a depth targeting the most permeable layer, performing laboratory testing on the selected soils samples, reviewing the field data and the laboratory test results, performing engineering analyses, and preparing a final geotechnical evaluation report that included results of our field and laboratory testing and determined infiltration rates at the site. Our team completed the project in less than two weeks. 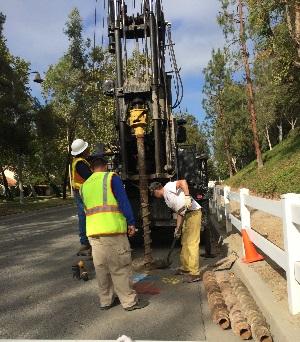 As an environmental friendly approach, the City intended to design and construct on-site storm water disposal systems in several streets. GAI was employed to perform a geotechnical investigation at Cienega Avenue, Monte Vista Avenue and Via Verde Street. The total length of the project was about 3 miles. We conducted 15 borings using a hollow stem drilling rig and the borings were advanced to a maximum depth of 25 feet. The laboratory tests were performed on the soil samples collected from different layers. Based on the tests results analysis, the preliminary permeability of soil layers at each location was determined and reported. We provided the city with the final profile of soil stratigraphy and their permeability properties. The report assisted the City in determining the future possibilities of using on-site disposal system and would be used as a guide in determining the locations of future field percolation tests. 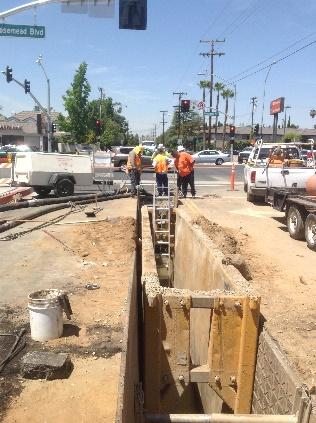 The project was intended to help protect public health by replacing aging infrastructure and help prevent groundwater contamination. The project also implemented the sewer master plan by taking advantage of an opportunity to upgrade the previous 12-inch sewer lint to a 15-inch line as recommended by the plan.

GAI provided during construction soils and asphalt testing services to the City. The grading work consisted of excavation, backfilling, compaction, and asphalt paving for the proposed sewer line, within the approximately 1,700 linear feet length of the project.